Born November 5, 1950 in Medicine Hat, Alberta, Susan is a Canadian trapshooter and medical researcher in osteoporosis and Women’s Health. When she was 12 Susan was introduced to trapshooting by her father Floyd Nattrass, who competed for Canada at the World Championships in 1958, 1962 and 1969 and at the Olympics in 1964. Trapshooting was a family affair with Susan, her father, and both brothers, Brian and Gary, competing in the sport while her mother, Marie, kept a sharp eye from the sideline. Susan shot her first registered ATA shoot in 1963 and started to compete internationally in 1969 in women’s trapshooting.

In American-style trapshooting Susan was named to 15 All American women’s teams from 1970 through 1983 and 2013; co-captained the 1973 team and was captain teams from 1974 to 1978. Susan has collected more than 30 Grand American awards as well as more than 10 Canadian ATA Championships, 20 ATA provincial championships (Alberta, Ontario, & Atlantic Provinces) and Washington state championships. 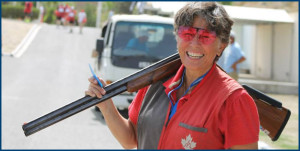 In the 1976 Summer Olympics she became the first ever woman to participate in the trapshooting event. At that time shotgun shooting in the Olympics was open to both sexes until after the 1992 Olympics in Barcelona. Months before the 1992 Barcelona Olympics, the IOC made the decision to make trap and skeet exclusive to men only and introduced double trap for women and men beginning at the 1996 Olympics. From 1992 to 1997 Susan lobbied internationally with the ISSF and IOC for the inclusion of separate women’s events in the shotgun events. She led a tireless campaign corresponding, conducting surveys, and playing politics against the decision to remove the two events. After five years, her campaign was a success and women’s trap and skeet events were included into the 2000 Olympics in Sydney.

Over the years, Susan has been honored to receive numerous awards provincially, nationally and internationally and inducted into a number of Halls of Fame. In 1981, she was made an Officer of the Order of Canada, the highest award given to Canadian citizen, and was awarded the Lou Marsh Trophy as Canadian Athlete of the Year. She was named Canada’s Female Athlete of the Year in 1977 and 1981. Susan was inducted into Canada’s Sports Hall of Fame in 1977 and the Amateur Trapshooting Association’s Hall of Fame in 1998. A complete list of her honors and awards is in the Honors and Awards section of this website.

Susan earned a Bachelor of Physical Education from the University of Alberta in 1972, a Masters of Art (MA) in 1974. She has been an instructor, administrator, lecturer and consultant in physical education and sports psychology. In between her first and second Olympic appearances in 1976 and 1988, she earned her Doctorate in Physical Education and Sport Sciences from the University of Alberta in 1987.

She has traveled around the world at various and many competitions spanning over four decades, nearly always accompanied by her mother and coach Marie.

Since 1996, Dr. Nattrass has lived on Vashon Island near Seattle. She located there when she joined the Pacific Medical Center as a medical researcher in September 1996 in osteoporosis and women’s health. She was Director of Research for Pacific Medical Centers from 2007 to 2013. Since 2002 Susan has owned and operated the Puget Sound Osteoporosis Center, where she continues conducting clinical trials in osteoporosis and women’s health as well as promoting studies in diabetes and pain management, and performing bone density (DXA) scans for both women and men.